View of London from Millennium Bridge

After a week of being ill, I finally ventured outside when I finished work for the weekend. Even though I live in London, I do get to explore it as much I want – my friends at work were baffled that I had never ever seen the Shard before. But since starting this blog, it’s gonna give me a kick up the arse to actually get out there and discover London in all its glory.

Today I had my visit to the Tate Modern. I am not a massive art buff, and I have not got a clue about modern art. But it’s pocket friendly (IT’S FREE!) and it’s a fantastic cultured day out in central London. I went with my boyfriend, Josh, who really isn’t into this kinda stuff. He likes his history and science and is not really an artistic person; so he wasn’t best pleased when I told him what we were getting up to on a Sunday. I remember him frequently saying that it’s going to be: “Pretentious as fuck.” 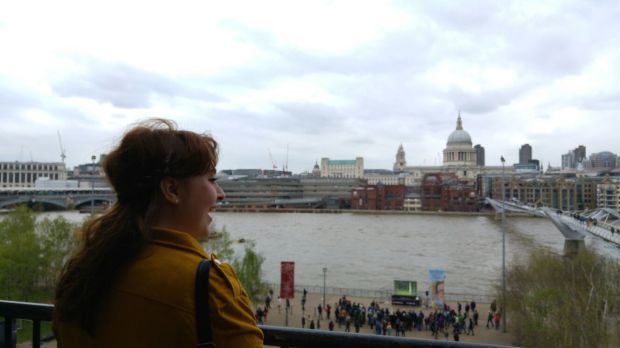 As we entered Tate Modern, there were big screens playing Shakespearian plays. I think it was something to do with it being the anniversary of his death and birthday yesterday. It was busy for a Sunday, so if you want to go when it’s quieter I’m thinking early weekday mornings would be great for some arty alone time. I was expecting to be quite bored and underwhelmed, but the exhibitions were actually very interesting. However, I was getting angrier by the minute by the sheer amount of people barging into me, and just being plain rude – but that’s London for you. There were original pieces from Andy Warhol and Roy Lichtenstein which was very exciting as I drew a lot of their art work back in my art GCSE age. I also really enjoyed pieces from Guerrilla Girls, feminist artists, who shine light on sexism in the art industry.

What I wore:  Today, the postman  delivered my Missguided mustard jacket that I have been lusting for weeks. So, obviously I had to wear it, despite it being 5 degrees and spitting all day. It was only £30 with a 25% student discount – bargain! I teamed it with a Topshop floral dress from their Autumn collection. I adore this pattern so much, I love it that much I also have the blouse version. The colours are so Spring 2016 and I keep falling back in love with it.

So in the end, the Tate Modern was a great day out in London; I would highly recommend it. One critiscim would be, that you have to pay £10 extra in order to get into other exhibitions. You can pay a monthly fee for a Tate Modern membership so you can visit new exhibitions for free, but this can be pricey. But if you’re looking for something cheap and in the heart of the city, then this is the place for you.